A regenerating code consists of

The configuration of the nodes satisfies the following conditions:

The code is named regenerating mainly due to the last bullet point—the nodes regenerate themselves.

The theory of regenerating codes concerns the relation among $n, k, d, \alpha, \beta, M$. For example, since any $k$ nodes contain $k\alpha$ symbols and can recover the file, the file size $M$ is at most $k\alpha$. Similarly, since $d\beta$ symbols repair a failing node, the node size $\alpha$ is at most $d\beta$. (Exercise) One can also show that $k - 1$ nodes ($\alpha$) plus $d - k + 1$ help messages ($\beta$) is at least $M$. There is a family of bounds of this type. They are called cut-set bounds and restrict where those parameters can live.

The opposite approach is to construct regenerating codes that aim to achieve low $\alpha$, low $\beta$, and high $M$. MoulinAlg20 utilizes multilinear algebra to do this. We construct a series of regenerating codes which we call Moulin codes. They achieve the best known $\alpha/M$-versus-$\beta/M$ trade-off to date. And it is conjectured that this trade-off is optimal. 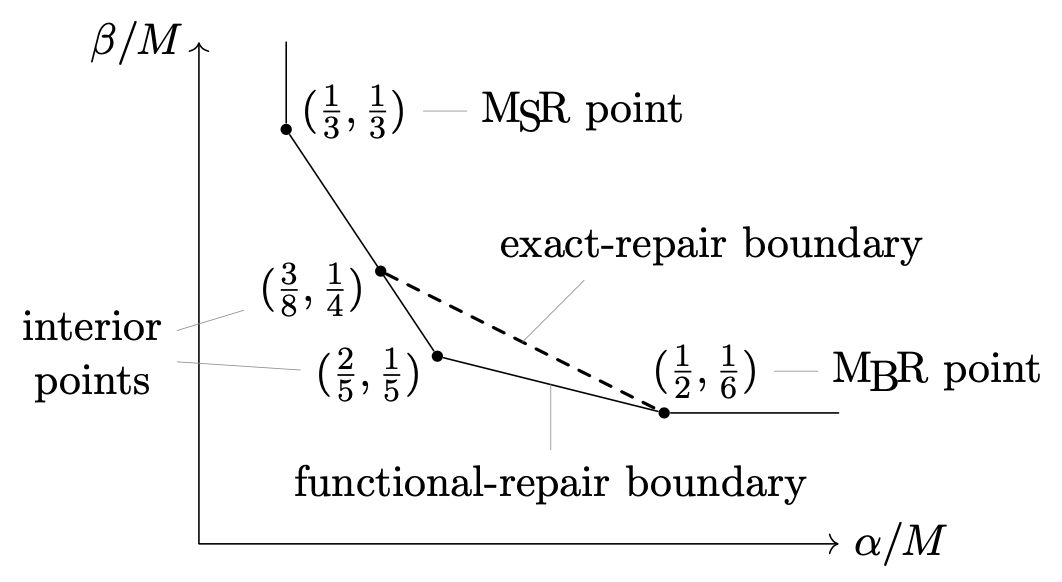 For more general parameters, check out this D3.js plot.

See also Table 2 on page 29 for the relations among some competitive constructions.

Atrahasis20 exploits multilinear algebra to construct MSR codes, which we called Atrahasis codes. Formally, an MSR code is a regenerating code with $M = k\alpha$ and $\beta = \alpha/(d - k + 1)$. From the constraint on $M$ one sees that there is no wastes of storage (hence the name minimum storage regeneration = MSR). Some researchers see MSR codes as the intersection of regenerating codes and MDS codes.

MSR alone attracts significant attentions because people want to minimize node size ($\alpha \geq M/k$), and only then they minimize help messages ($\beta \geq \alpha/(d - k + 1)$ given that $\alpha \geq M/k$). See Table 1 on page 5 in Atrahasis20 for a comparison of some existing contraptions.